Availability and Reservation of Company name

Name of the company shall not be :

So, before applying for incorporation or conversion, applicant should make sure that name is unique and they do not contravene any rules and regulations.

Checking whether proposed name is available or not

To check whether proposed company name is available or not, visit www.mca.gov.in

Hover over MCA Services in menu, you will see mega menu displayed. Under Company services, click on 'Check Company Name' 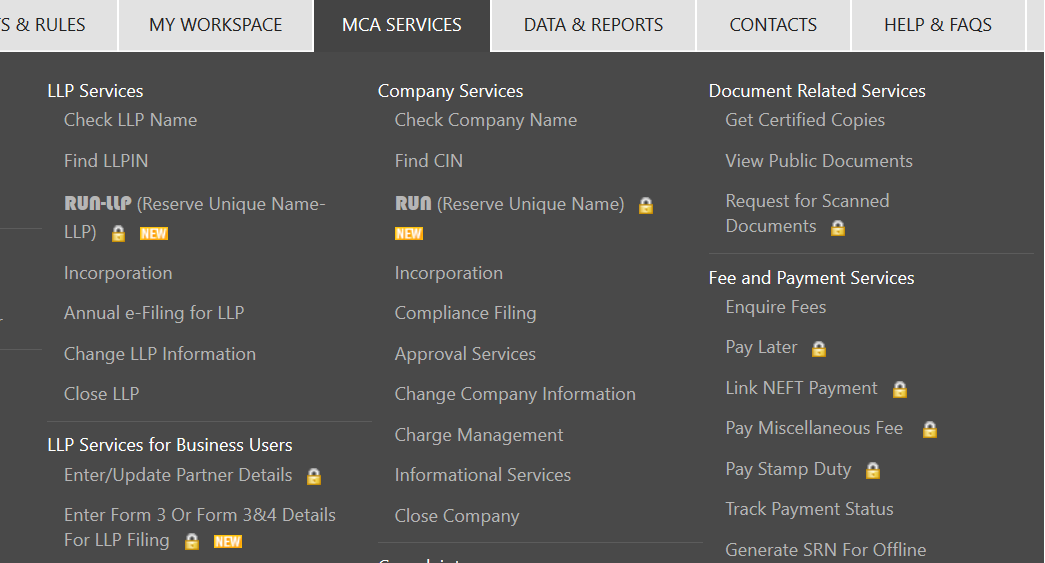 In the next screen, enter proposed name, to check whether it is available or not. You can enter up to 6 names at a time. Initially only one field will be displayed, to add more fields click on ‘Add more names' 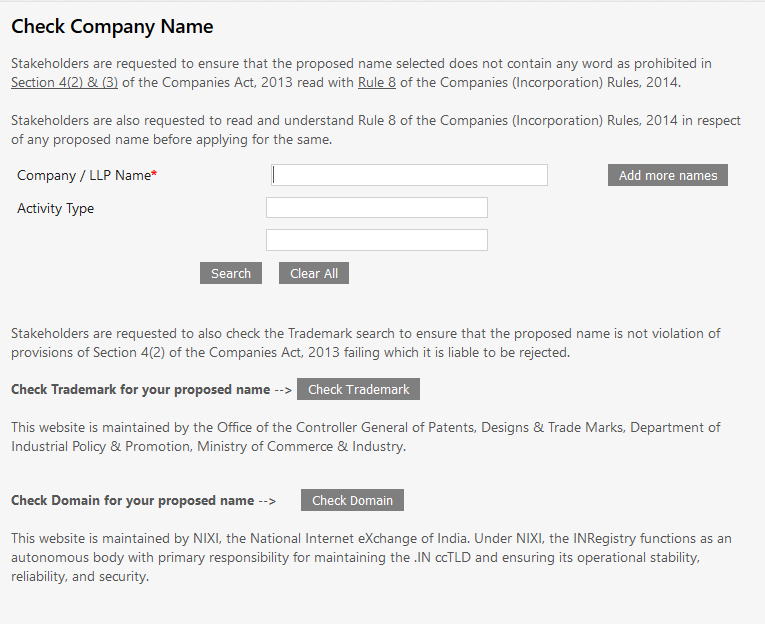 If the name entered is available, then pop up window will be displayed on the screen, telling that ‘Entered Company/LPP name does not exists’

If there is already a Company or LLP registered with the same name, then name of that company or LLP will be displayed. 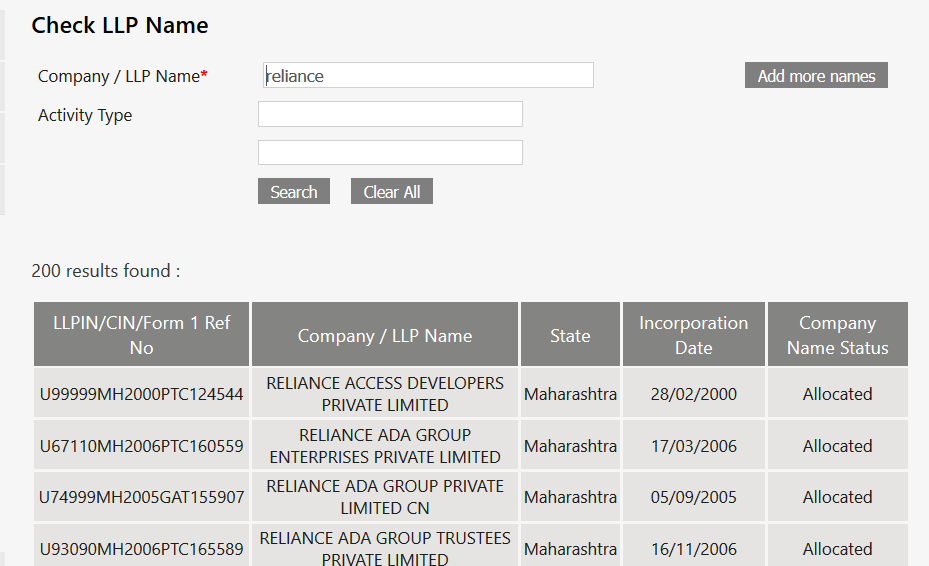 Points that are to be considered while applying for name

In determining whether a proposed name is identical with another, the differences on account of the following shall be disregarded -

The name shall be considered undesirable, if-

The applicant shall declare in affirmative or negative ( to affirm or deny ) whether they are using or have been using in the last 5 years , the name applied for incorporation of company or LLP in any other business constitution like Sole proprietor or Partnership or any other incorporated or unincorporated entity and if, yes details thereof and NOC from other partners and associates for use of such name by the proposed Company or LLP as the case may be and also a declaration as to whether such other business shall be taken over by the proposed company or LLP or not .

For the purposes of clause (b) of sub-section (3) of section 4, the following words and combinations thereof shall not be used in the name of a company in English or any of the languages depicting the same meaning unless the previous approval of the Central Government has been obtained for the use of any such word or expression:

For the Companies under Section 8 of the Act, the name shall include the words foundation, Forum, Association, Federation, Chambers, Confederation, council, Electoral trust and the like etc. Every company incorporated as a “Nidhi” shall have the last word ‘Nidhi Limited’ as part of its name.

When the name is available and it satisfies all the requirements, then application shall be made to Registrar for reservation.

An application for reservation of name shall be made through the web service available at www.mca.gov.in by using RUN (Reserve Unique Name) along with fee as provided in the Companies (Registration offices and fees) Rules, 2014, which may either be approved or rejected, as the case may be, by the Registrar, Central Registration Centre.

The proposed name applied should not be undesirable as per the relevant provisions of the Act and rules dealt with in this matter.

How to apply to registrar for reservation

Hover over MCA Services, under Company services, click on ‘RUN (Reserve Unique Name) You will be asked to log in. If you are not registered, register yourself on MCA by clicking on ‘register’ in top menu. 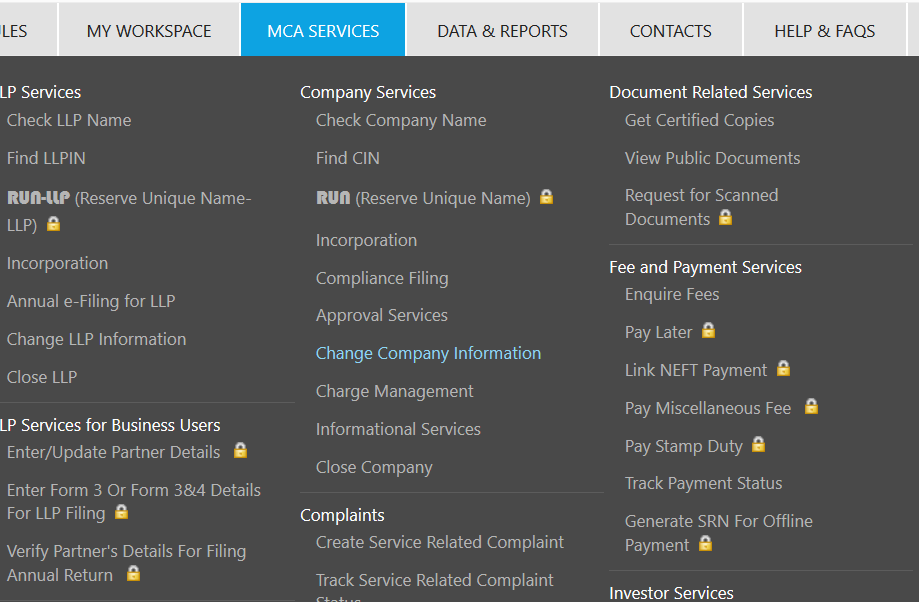 In the next screen ‘RUN’ application will be displayed. Fill the application. 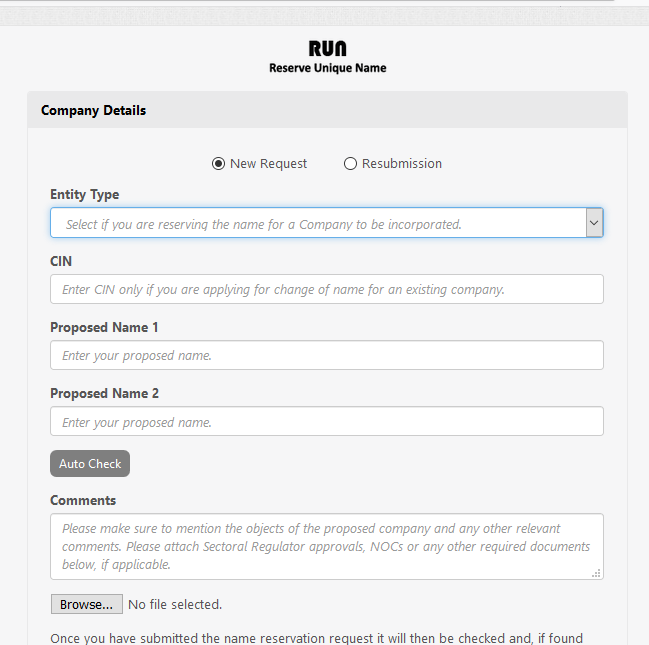 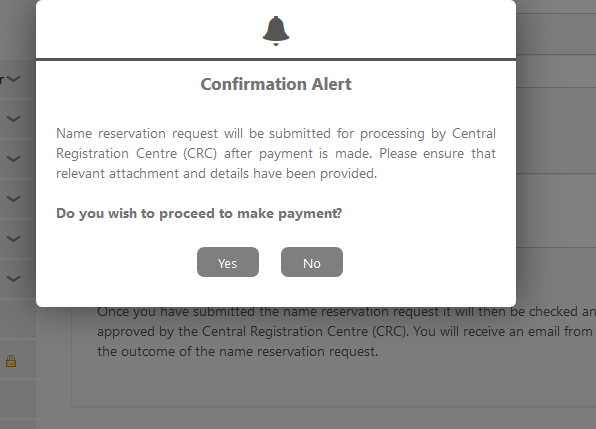 Click on Yes, you will be then asked to pay Rs 1,000/- After payment is made your application will be sent for processing. You will be get approval or rejection mail.

On successful submission of the proposed name in RUN service, SRN will be generated and shown to you which will be used for future correspondence with MCA.

Also Challan will be generated depicting the details of the fees paid by the user to MCA.

The Central Registration Centre (CRC) may on the basis of information and documents provided, reserve the name as a follows:

Where after reservation of name, it is found that name was applied by furnishing wrong or incorrect information, then -

I am CA, you can contact me for resolving all your tax queries. Reach me at ankitsharma1141@gmail.com Check Profile